WASHINGTON, DC — U.S. Rep. Harold “Hal” Rogers (KY-05) attended a special meeting of the Gateway Area Development District (ADD) to provide an update about on-going work in Washington, DC and across Southern and Eastern Kentucky. Congressman Rogers ended his remarks with a tribute to Gail Wright who is retiring after dedicating nearly 30 years as Executive Director of the Gateway ADD.

Congressman Rogers recently gave a tribute on the House Floor to honor Wright’s tireless efforts on behalf of the region and he presented her with a framed copy of his remarks, which are recorded in the Congressional Record.

“Gail has been an incredible force for the Gateway area,” said Rogers. ” She knows the inner workings of grant funding; she knows how to bring strategic partners together; and she is passionate about making this region a better place to live for our children and grandchildren.”

Wright has been a long-time champion for economic and community development in the Gateway area. She has assisted local communities with critical infrastructure improvements and generating new innovative opportunities to spur job creation and regional development.

Josh Farrow has been named as Wright’s successor. He was Associate Director of Project Development. 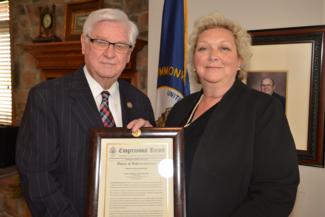 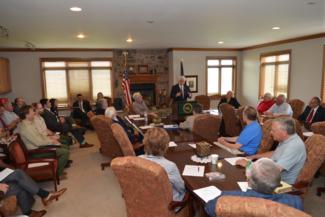